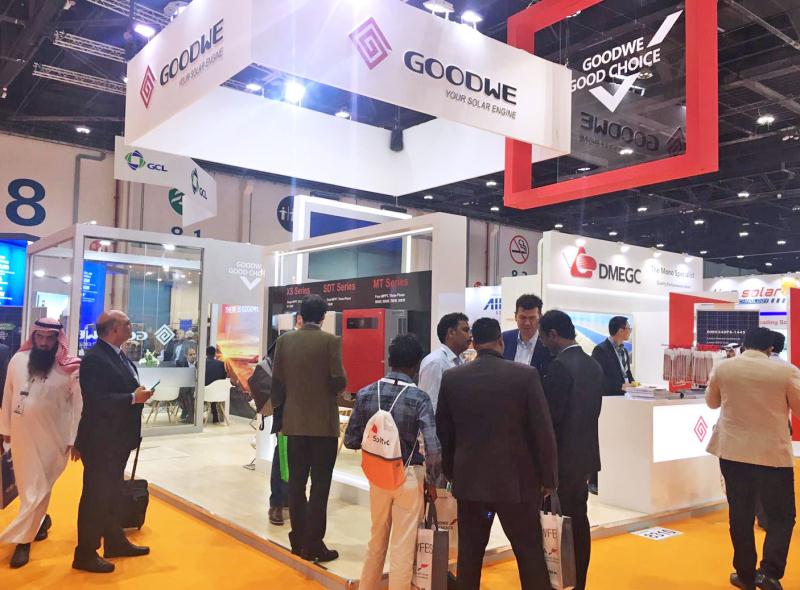 In consideration to the diversity of the public that attended this exhibition, at the WFES GoodWe displayed inverters of the Series XS, SDT G2 and MT for utilization on residential, commercial and industrial applications as well as one of its most successful energy storage solutions, the ET inverter. This is truly a very representative assortment of the best that GoodWe has to offer, featuring many technical improvements on GoodWe’s classical inverters.

GoodWe has attended the WFES in previous years but this year attendance was particularly successful. The company was represented by an enriched team from its headquarters and its recently established European offices, clearly aiming at building synergies among diversified markets. The visitors to the WFES were delighted with the fresh image of GoodWe and the new products of the company that have added a great deal of functionality, comfort and flexibility to users from different realms.

Given the current characteristics of the local solar industry, the inverter demand in the MENA region tends to be stronger for three-phase inverters such as the GoodWe’s MT and ET, two of GoodWe’s best presentation cards and inverters already highly successful. These inverters attracted a great deal of attention due to their technological features and their light and compact design that make them so easy to install, generating a lot of inquiries from the local customers.

This year’s edition of the WFES saw a strong attendance of old but also many new companies of the industry, from well-established and heavy weight solar distributors and installers all the way to new players just entering the industry. The bulk of the visitors came from Abu Dhabi, Saudi Arabia and the Gulf emirates but there were also visitors from more distant north-African countries that are moving quickly to respond to the growing demand for PV products in their countries.

For years, GoodWe has been following closely the expansion of the solar industry in the MENA region. It’s worth mentioning that the company is already a dominant player in the Turkish market. The successful participation of GoodWe at this year’s WFES, marks an inflection point toward a stronger involvement of the company in the region, integrating it to the company’s already growing business in Europe and India.

#
Monitoring System: The Solar Hero Behind the Scene
MORE